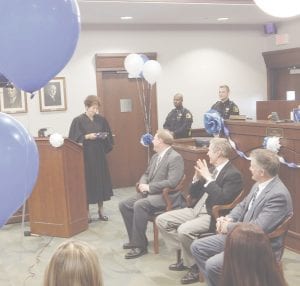 Mental Health Court Probate Judge Jennie E. Barkey awarded a plaque to County Sheriff Robert Pickell on Wednesday, October 25, for his cooperation over the past 10 years. “Every time I talk about the spirit of cooperation, and every time about the relationship we have with the sheriff’s department, people are dumbfounded,” said Barkey

Wednesday, Oct. 25, Genesee County held a formal celebration honoring 10 years of their Mental Health Court – the first of its kind in the Michigan – which offers an alternative program for offenders battling mental illness. Since its inception in 2007, the court has graduated 264 participants and carries a 97 percent success rate.

Barkey herself received a plaque, along with an official proclamation issued from the state Supreme Court.

Barkey said she was approached by Mays during her time as a judge after witnessing a startling number of cases in which the accused were forced into psychiatric treatment. She recalled many defendants – described as good, caring people – shaking during their sentencing and unsure of their future.

“We were sick of seeing it go on this way,” said Mays. “We decided we can either gripe about it or fix it.”

Mays modeled Genesee County’s court after one she observed in Ohio. The court currently serves 55 individuals, many of whom sat in during the ceremony. Graduates from the program were also in attendance.

“I am extremely proud to celebrate this court’s special milestone because I believe in the work that mental health courts are doing to get nonviolent, troubled individuals the help they need and get them out of the criminal justice system,” said State Court Administrator Milton L. Mack, Jr., who has served on the state’s Mental Health Diversion Council since his 2015 appointment by Gov. Rick Snyder. “Michigan’s mental health courts are truly saving lives and strengthening communities across the state.”