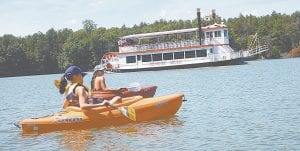 Paddlers enjoy some time on Mott Lake with the Genesee Belle traveling the waters behind them. The Genesee Belle departs from Crossroads Village. Mott Lake is a body of water made possible as part of the original Master Plan for the parks in the city of Flint. It was created by damming a section of the Flint River.

GENESEE COUNTY — Genesee County Parks celebrates 50 years of the best in nature this year and has programs listed in its Family Fun Guide.

“We’re kicking it off Sunday with a fireworks show at Bluebell Beach, which starts at 10 p.m. or when it gets dark, if the weather allows” said Danielle Fulcher, communications, events and brand manager for Genesee County Parks.

For 50 years, Genesee County Parks has helped to preserve the Great Lakes history and heritage.

“The best example of that is Crossroads Village and Huckleberry Railroad, where we have a historic village people can visit and see what life way back when in the Great Lakes town was all about,” Fulcher said.

Genesee County Parks has offered tremendous recreational infrastructure to the people of Genesee County and beyond for half a century.

“We pride ourselves on maintaining all of our properties to the highest safety standard and creating recreation places for visitors that allow them to take advantage of everything from playgrounds to beaches to pavilions where they can host family reunions, birthday parties and special events to a treehouse at For-Mar Nature Preserve and Arboretum,” Fulcher said. “We have a wide variety of amenities across the over 40 Genesee County Parks locations.” 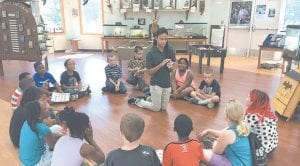 The Genesee County Parks started just as vacant land that was purchased, and it’s now been developed into the state’s largest county park system with all those amenities for visitors to enjoy.

Many programs this summer occur at For-Mar Nature and Arboretum. The theme of this summer’s Superhero Trail is Superhero Babies, the backstory of For- Mar’s nature superheroes, the preservers.

Flushing County Park features a playground program again this year, as well as For-Mar on the Road programming. The off-leash dog area incorporated into the park last summer is expected to be popular again this summer.

A pathway was refinished at Stepping Stones Falls and extended there so it is now part of the Flint River Trail and the Michigan Iron Belle Trail, a statewide trail system. So, there are now connection points at Stepping Stone Falls that connect to the Flint River Trail and head to downtown Flint and in the other direction the paved trail goes to the Genesee County Parks office, on the corner of Stanley and Genesee roads.

“We’re under construction for a section of that same trail that picks up here at our office and continues out to Vassar Road that will be done this summer,” Fulcher said.

The idea of Genesee County Parks was birthed when the Genesee Recreation Area was embedded in the Master Plan adopted by the city of Flint in 1950. The idea gained traction when Charles Stewart Mott said “let’s do it” in 1964 when this idea was presented to the C.S. Mott Foundation Board of Trustees. The Mott Foundations’ second grant to the cause of $2, 523,000 was for acquisition and development at the Genesee Recreation Area.

Fulcher said Genesee County Parks 50th anniversary celebration honors Mott and his vision, but 50 years is only the beginning!