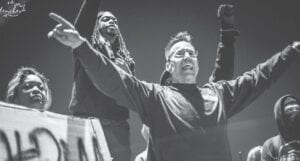 FLINT TWP. — When a large group of protestors marched in Flint Township over the weekend, local police chose to put down their weapons and walk with demonstrators in a show of support.

On Saturday evening, several hundred people gathered at the Target store on Miller Road to protest the death of George Floyd, an African-American man who died in police custody in Minneapolis on May 25.

Protestors carried signs and made their way down Miller Road on foot and in vehicles to the Flint Township Police Department, where they planned to demonstrate as part of a nationwide series of protests against racial injustice and police brutality.

As Flint Township Police and several other departments monitored the scene, Genesee County Sheriff Chris Swanson attempted to diffuse the tense situation by removing his riot gear and talking to protest organizers. Several Flint Township police officers also spoke with the crowd and bumped fists with demonstrators in a show of solidarity. 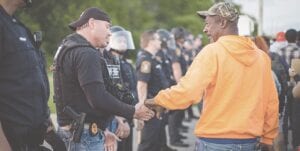 Protestors and police exchanging handshakes during the march

Swanson said his decision to enter the crowd was entirely spontaneous.

“It was probably the worst tactical decision I could have made, but it changed the entire mood of the crowd,” he said. “I told them that we don’t condone what happened to Floyd, and that we love them and want to protect them.”

With tensions cooling, Swanson embraced and high fived several protestors. Then he asked the group what they wanted to do next.

“That’s when they shouted, ‘Walk with us!’” Swanson said. “The protestors had been filled with righteous anger, but they were open enough to listen. They just wanted their voices to be heard. They deserve all the credit for putting this moment on the map.”

Swanson and several officers accompanied the protestors down Fleckenstein Drive to the Flint Township Police Department, where a brief demonstration was held. The group then returned to the Target store and finished with a prayer.

No arrests were made during the protest, and no property damage was reported.

“Without their assistance, I don’t think this would have ended the way it did,” Salter said. “I want to thank the responding officers across the county for their support and for showing professionalism. I also want to thank leaders of the protest for showing other communities that you can protest peacefully and still have your voice heard.”

In light of Saturday’s peaceful protest, Swanson said that his department and other police agencies across the country must continue to build relations with all community members.

“People are tired of empty promises: They want action,” he said. “We need to set the tone and serve people when no one else is looking and with no strings attached.