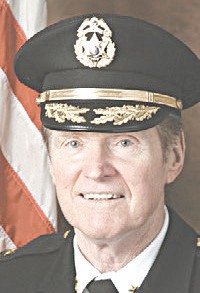 GENESEE COUNTY — Longtime Genesee County Sheriff Robert Pickell has announced that he will be retiring at the beginning of next year.

Pickell, who was appointed Genesee County Sheriff in 1999, will be stepping down after more than 50 years in law enforcement. He made his decision public at a press conference held last Wednesday, saying that he wanted to spend more time with family who live out of state.

During his 21-year tenure as Genesee County Sheriff, Pickell has pioneered several local law enforcement initiatives. Most recently, he formed the GHOST task force, which is aimed at curbing human trafficking in the county.

Pickell was instrumental in spearheading elder abuse prevention measures, serving on former Governor Jennifer Granholm’s Elder Abuse Task Force and holding the position of Project Director of the Elder Abuse and Financial Exploitation Prevention Team. He also worked to reduce the population of people with mental illnesses in local jails through the Stepping Up initiative.

Pickell’s law enforcement career began with the Flint City Police Department, where he was a police officer on special assignment to the Genesee County Prosecutor’s Office from 1965 to 1967. Pickell continued working with the prosecutor’s office until 1989, when he moved to Langley, Virginia, to work for the Central Intelligence Agency (CIA).

Pickell returned to Genesee County in 1994 and established Pickell Investigations and Polygraph Services in Flint, which he operated until his appointment as Genesee County Sheriff in 1999.

Gleason said that the panel is looking to hold future public discussion sessions to get feedback from residents about the Genesee County Sheriff appointment process and to learn what qualities the public is looking for in Pickell’s replacement.

“We want the process to be transparent, so that we can seek out and select the most-qualified person possible for this important administrative position,” Gleason said. “We don’t want to name a replacement until Pickell is officially retired.”

Pickell’s final day as Genesee County Sheriff will be Jan. 5, 2020.