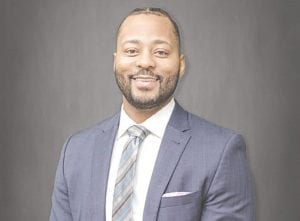 GENESEE COUNTY — NBA veteran, Morris Peterson, had an impressive basketball career. It began in Flint, where he was raised by his parents, Morris, Sr. and Valarie Davis- Peterson, both educators in the Flint Community School system. Morris, a Flint Northwestern grad, attended Michigan State University on a full athletic scholarship.

While at MSU, Peterson received numerous personal accolades, such as being named an All-American, first-team All-Big Ten and Most Outstanding Player during the 2000 National Championship game, which the Spartans won. He finished his four-year career as the ninth all- time leading scorer at MSU and ranks fifth in three-pointers made (with 146) and attempted (with 387). As a senior, he averaged 16.8 points and six rebounds.

After graduating in 2000 with a Bachelor’s degree in Child Development, Peterson was drafted by the National Basketball Association’s Toronto Raptors with the 21st pick. During his 11 year NBA career, he not only played for the Raptors, but the New Orleans Hornets and Oklahoma City Thunder. Throughout his career, Peterson averaged 10.8 points, 2.7 rebounds and .09 assists per game.

He currently is involved in various business ventures in and around the Flint area, including his restaurant, MoPete’s Sports Retreat. In addition to his businesses, he also does a lot of philanthropic work. His foundation, the Morris Peterson Jr. Foundation, supports the Flint community.

Peterson has always had a desire to give back and understands that his successes where not only the result of hard work on his part, but also the guidance and sacrifices of his family and the support of his community. That’s why it’s important for him to help youth. He was once where they are and knows that he was blessed so that he can be a blessing to others.

“I don’t do things for the community for the accolades. I do it to be of service to the community I grew up in. I have been blessed tremendously with the ability to be able to give back and it’s my duty to do so. Receiving this recognition is greatly appreciated, especially since it’s from my beloved Michigan State University. I bleed green, but I know there is still a lot of work that still needs to be done and there are still needs that need to be met. As long as I’m able to, I will continue to help my community” said Peterson.

Peterson will be recognized for his accomplishments on Sunday, Aug. 25 during the scholarship golf scramble. Anyone wanted to see the ceremony and have lunch can contact geneseecountyspartans@gmail.com for ticket information.