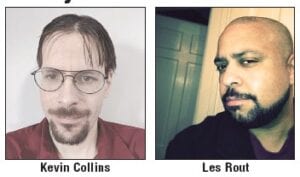 Rout started his career with GDL as a Library Assistant in 2018. His first role as a branch librarian began at the Montrose-Jennings branch. Prior to joining GDL, he worked at the East Lansing Public Library.

Rout plans to make sure the Genesee Valley Center stays on the cutting edge.

“It’s heavily used,” he said. “I want to keep it as up-to-date as possible and make sure that it has the books that people want. I want to keep our Friends group up and running, too.”

According to Rout, the biggest challenge facing libraries today is fighting the idea that libraries are not relevant. Aside from saving people money by lending, internet access is vital to patrons.

“It’s surprising just how many people don’t have internet access or printers,” he said.

A top priority for Collins is to connect with the patrons and the local community and learn their tastes and their needs, in order to provide the best materials and services for them.

“We can provide information from trusted sources on a number of topics, in-person, over the phone, or online on a wide array of subjects,” he said. “With a lot of misinformation out there, my goal is to provide patrons with accurate and clear answers to any questions they may have.”

Collins is a technology buff and is willing to teach patrons at any skill level. He regularly helps people learn basic computer and smartphone skills and loves to help people get started with the GDL digital services such as hoopla and Libby.

“The most important things libraries offer to patrons is access,” Collins said. “Access to the internet has become even more important, with most job applications and government services asking for people to fill out forms over the internet, and e-mail and social media becoming one of the most popular ways for people to keep in contact. Access to the latest books, movies and television shows is also extremely important, and allow people to try new things that they might be curious about.”

Collins holds a bachelor’s degree in experimental psychology from Tiffin University, and a master’s degree in Library and Information Science from Wayne State University. — B.G.