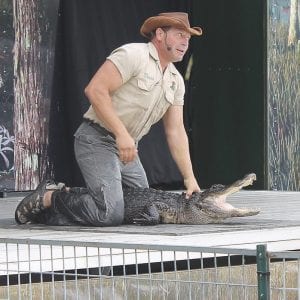 David Castillo performs as part of the Kachunga & The Alligator show. The show occurs daily at 1, 3 and 7 p.m.

MOUNT MORRIS TWP. — The smell of deep-fried everything fills the air. Excited cries, the braying, the bleating, and the mooing of livestock reaches the ear through most of the fairgrounds.

Children run on dusty, worn paths, exuberant. Overhead, the sky is dark with clouds that, thankfully, decide not to rain for most of the day.

The 164th Genesee County Fair kicked off Monday and will once again bring a week of fun and entertainment to the surrounding communities.

The long-running fair is from Aug. 12-18 this year, with a variety of grandstand entertainment, shows, rides, and agricultural and horticultural competition. With as long as the fair has been going, however, there are still people who are making this year’s fair their first visit.

“I brought my great niece to see all the animals,” said Jackie Mooring, a Flint resident who regularly comes to the fair. The great niece in question, Emily Tolbert, took great enjoyment in feeding the goats and sheep at the County Fair petting zoo, their muzzles dwarfing her hands as they accepted her offering with gusto.

David Castillo, who runs the Kachunga and the Alligator show from Florida, got a strong initial turnout for his performance. His show has been to the Genesee County Fair a couple times; this year he said he’s impressed with the growth of the fair.

“Everything looks grown since the last time I remember, so the fair seems to be growing more and more each year,” said Castillo.

Castillo is also pleased with his reception. At his first show of the week, the bleachers ringing his stage were packed with eager fairgoers, a fact for which he’s most appreciative. People watched intently, delighted by his demonstration of alligator wrestling techniques while he detailed the particulars of the animal to them.

“As long as we got people enjoying our show I’m happy, you know, and I appreciate that every bit,” said Castillo. His show is happening at 1, 3, and 7 p.m. all week.

At its heart, though, the Genesee County Fair is about the agriculture and the livestock. Renee Whitt, of the Davison Livestock Club and Friendly Farmers out of Clio, mentions the work that goes into the competitions is something to be appreciated.

People don’t realize that it’s a week long project here; it’s a year round project at home,” she said. However, she worries that without support, 4- H, which provides many of the animals who compete at the Fair, might be lost.

Despite this, competition is lively, and her and her family do this because of their love for it.