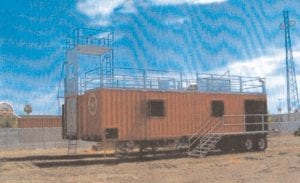 FLINT TWP. — For years, local firefighters have sought out buildings to set on fire for the purpose of live training.

But that will no longer be necessary with acquisition of a Mobile Fire Training Facility to be purchased with a matching federal grant, accepted by the Flint Township Board of Trustees at its Monday night meeting.

Assistant fire chief Mike Burkley told the board that he received notice on Feb. 3 of a $159,200 regional FEMA Assistance to Firefighters Grant that will cover 80 percent of the costs of a Self-Contained Breathing Apparatus (SCBA) and a Live Fire Trainer mobile unit.

The grant requires $39,800 in matching funds, must be accepted by March 3 and fulfilled within one year.

In his pitch to the township board, which ultimately would be held accountable for matching funding, Burkley explained that such grants are awarded for regional benefit and that he had raised all but about $8,250 of the required 20 percent match.

Fire Chiefs from throughout Genesee County threw their support behind the proposal, pledging matching grant funds. Many of them also attended the meeting.

The Genesee County Fire Chiefs Association and the Genesee County Firefighter Training Committee each voted to give $5,000 to the project. Fire Departments pledging $1,950 to the fund include Atlas Township, Burton, Davison, Grand Blanc, Linden, Fenton, Flint, Swartz Creek and Mundy Township for a total of $19,500.

Fire Chief John Ringwelski added a tentative commitment has been made by The 100 Club to make a lump sum donation to the project instead of the individual safety grants it usually awards to fire and police departments each year. A decision from that group will be made at its next meeting, he said.

Before voting to accept the grant, township board members asked questions about storage, repairs, transportation and insurance for the training facility.

The SCBA and Training Unit will be stored at the Flint Township fire station but travel throughout the county to participating departments and to the Genesee County Fire Academy.

Burkley said the department has applied for grants four times in the past and this was the first one was awarded.

“Now we train in our station or we make mock walls and doors or go track down a home to train in,’’ Ringwelski said. “This will provide a higher quality training in a much more controlled atmosphere.”

In its letter of support the county fire chiefs association said that fire departments in Genesee County “feel very strongly about working together and improving on our ability to provide quality fire training to our firefighters.”

“We feel this is very important to the safety and well-being of our personnel. … The association feels that this training equipment would be very beneficial to the entire county.”