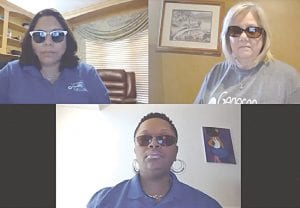 GENESEE COUNTY — Genesee Health Plan has come up with a creative way to get more people participating in the 2020 United States Census.

“Census 2020: Mission Possible” is a short online film aimed at encouraging hard-to-count populations in Genesee County to be counted in the census. The video features Genesee Health Plan employees Sherika Finklea, Anita Arnold and Perlita Irish, who inform viewers about the importance of completing the 2020 Census questionnaire.

Genesee Health Plan has entered the video into the “Get Out The Count Video Challenge,” a contest organized by the U.S. Census Bureau’s Census Accelerate program. Genesee Health Plan is competing with other agencies and health systems for a $30,000 grand prize, which will be awarded to the video that has the highest online visibility and the most impact in drawing census participation.

Shannon Ciszek, communications coordinator for Genesee Health Plan, said that “Census 2020: Mission Possible” runs in tandem with her organization’s purpose to provide healthcare to the uninsured.

“Pre-pandemic, we were awarded a grant from the Community Foundation of Greater Flint to educate the community on the census,” she said. “We applied for the grant because many people who rely on our healthcare coverage are in hard-to-count populations, such as senior citizens and non-English speakers.

“With our switch to digital outreach, we thought this would be a great opportunity to make an informational video about the census and put a fun spin on it,” Ciszek added.

While several communities—such as the City of Flushing and Flint Township—have already surpassed 70 percent self-response rates, Genesee County’s census participation rate stands at just over 60 percent. Flint itself is still hovering under 50 percent for census responses, according to data from the Flint Mayoral Executive Count Committee.

Ciszek said that limited internet access is one of the main contributors to low census responses in Flint and some surrounding areas.

“Flint is considered a low internet zone, meaning that many people have little or no access to the internet,” Ciszek said. “Some do have cell phones with web browsers. We’re trying to reach those people to let them know that they can fill out the census on their phones or request a paper copy through the mail.”

The video also includes a message in Spanish, helping non-English speaking individuals to understand options for filling out the census.

Yvonne Lewis, the Director of Outreach for Genesee Health Plan, said that 2020 is a critical year for Flint and surrounding communities to reach an accurate census count.

“If we don’t have enough individuals complete the census, it will be more difficult for dollars to be allocated for programs that are needed here, like the school lunch program and Head Start,” she said.

Lewis said that Genesee Health Plan’s digital outreach puts a “face” to her organization, while getting people more comfortable with participating in the census.

“We’re making sure that the message is delivered and that it becomes actualized,” she said. “It’s about letting people know that it’s not too late to be counted in the census and that their voice matters.”