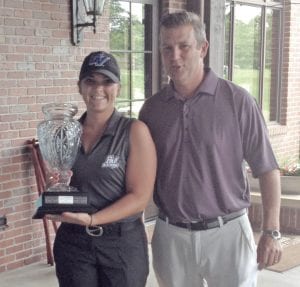 Guckian is last year’s Michigan Player of the Year.

Tournament organizer Jim Snow said the tournament is by invite only and goes out to the area’s high school golf coaches and college golf programs. The majority of the players come from Genesee County but Snow added that the field is opened up to include the best from Lapeer and Shiawassee counties, too.

The tournament was founded at the Flint Elks Club and the trophy honors Arlene Hagan with a spectacular crystal Arlene Hagan Cup that goes to the winner.

“Arlene was an icon at the Flint Golf Club,” said Snow. “She won something like 30 Club championships and was the first female president at the Club. She was also one of the original backers of girls’ high school golf.”

Next year the tournament continues its rotation and will be hosted at Atlas Valley.