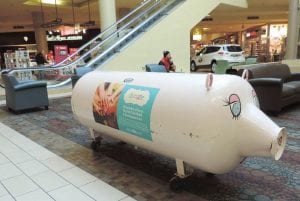 This little piggy bank is standing ready at center court in the Genesee Valley Center shopping mall to collect funds to support the health of children affected by the Flint Water Crisis.

FLINT TWP. — On Monday, Genesee Valley Center kicked off a donation drive to benefit The Flint Child Health & Development Fund (FCHDF). Facilitated by the Community Foundation of Greater Flint, the FCHDF supports the delivery of critical short and long term impacts experienced by Flint families exposed to lead as a result of the 2014-2016 Flint Water Crisis, according to the Foundation’s website.

An oversized piggy bank, crafted from a residential propane “pig” has been placed in the mall’s Center Court to collect donations from shoppers. All monies collected will go to the FCHDF.

“Although the mall does not receive water from the City of Flint, many of our shoppers and retailers’ employees do,” said Kristen Cassabon, mall marketing manager.

“The FCHDF is a great way for the mall and shoppers to lend continued support to the residents of Flint.”

No time limit has been set on how long the piggy bank will be located at the mall, Cassabon said.

Last October, the mall served as a collection site for cases of water donated to Flint Schools, shortly after school started, when medical reports first surfaced that Flint water was not safe to drink.