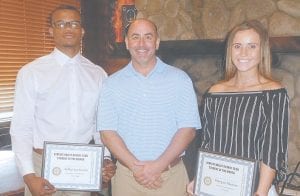 From left, Ja’Kavien Lewis, nominating teacher Jay Witham, and Morgan Sherrer. Witham nominated Lewis and Sherrer to be Students of the Month for the Genesee Valley Rotary.

FLINT TWP. — Carman-Ainsworth seniors Ja’Kavien Lewis and Morgan Sherrer have been named students of the month by the Genesee Valley Rotary.

Lewis is the son of Latoya Jenkins, stepfather, James Jenkins and father, Preston Moore. He hold a GPA of 3.6 with numerous Accelerated and AP Classes. He plans to attend Northwood University on a full ride basketball scholarship. Lewis wants to pursue a bachelor’s degree in Insurance Risk Management.

He has received the Saginaw Valley All Academic award three times, was the Kiwanis Club of Flint-Athlete of the Month for February, ABC 12 Athlete of the Week and is in the running for the Black Scholar of the Urban League.

The reason he was nominated is his numerous volunteer hours at water distribution centers throughout Flint; mentoring and reading to fifth graders at Dye and Rankin elementary schools; and he is an avid member at his Church of the Harvest, where he is a greeter and sound technician.

Morgan Sherrer is the daughter of Ron and Lori Sherrer. She has a GPA of 3.95 with numerous Accelerated and AP Class and Dual Enrollment Mott

She plans to attend the University of Toledo, pursuing a bachelor’s degree in Nursing, with a master’s program to become a Nurse Anesthetist.

Sherrer is a member of National Honor Society, Student Council, HOSA, a varsity member in volleyball and softball serving as captain for each sport all four-years of high school. She is also second team all-conference in both Volleyball and Softball.

Citizenship Awards and other recognitions include being Top 10 in her class, Academic All-State, Saginaw Valley All-Academic Team and she’s won Regionals, two years in the HOSA Competition.

The reasons for her nomination include volunteering with Carriage Town Ministries, Thanksgiving Food Handout, Mid-Michigan Food Banks and at numerous blood drives. — G.G.