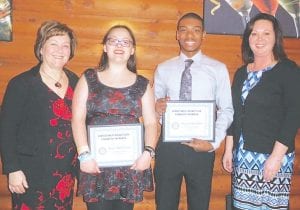 Kate McGilvery and Byzjon Speights, seniors at Carman-Ainsworth High School were recognized by the Genesee Valley Rotary as Students of the Month for January.

FLINT TWP. – Kate McGilvery and Byzjon Speights, seniors at Carman- Ainsworth High School, have been selected as the Genesee Valley Rotary students of the month for January. Each month during the school year the Rotary selects two outstanding students nominated by their teachers, who become eligible to win a $1,000 scholarship at the end of the year.

Kate was nominated by principal Debbie Davis for her involvement in community service throughout her school years. Two most recent activities include tutoring other students at the high school and assisting with after-school tutoring, and during advisory class.

Through WoodmenLife, Kate volunteers in the community providing donations to the ABC 12 Spirit Cup at C-A. She has been involved with Toys for Tots, a water drive for the Flint community, and a personal hygiene items for the Women’s Shelter.

Kate is currently taking 3 Advanced Placement (AP) Classes), a Project Lead the Way (PLTW) course –Computer Science Principles; Orchestra and is also taking a dual enrollment college course through Baker College of Flint – American Sign Language I and II. Kate has the distinction of being the only student at CAHS who has explored all three PLTW paths taking PLTW Principles of Biomedical Science, Principles of Engineering and the PLTW Computer Science.

Kate has been part of the AGO (Accelerated Graduation Opportunity) program since ninth grade, which allows students to earn college credits during summer programming. By graduation, Kate will have earned a total of 16 college credits on her transcript

She holds a 3.786 grade point average and still is exploring her college options.

The second winner, Byzjon, was nominated by his teacher Sara Standen. He also was cited for his community service including working with the Student Council to host a Halloween Party for elementary students. As a member of the Big Mo robotics team, he hosted a tournament for younger students and mentored them. Though the National Honor Society (NHS), he assisted with a Thanksgiving Food Drive (collected canned goods and organized the food baskets for families in the community). Though the Health Occupations Students of America (HOSA), Byzjon assisted with a Red Cross Blood Drive and he also has volunteered at the North End Soup Kitchen.

Besides HOSA, robotics, Student Council and NHS, his other extracurricular activities include quiz bowl.

Byzjon holds a 3.516 g.p.a. and is currently taking 4 AP Classes as well as taking Med and Health Care I and a Project Lead the Way course – Principles of Biomedical Sciences. He hopes to attend either Michigan State University or The University of Michigan, leaning toward a degree in science or medicine.