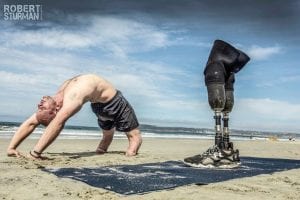 Dan Nevins, a retired U.S. Army sergeant who lost his legs in Iraq, will host a yoga workshop on Nov. 18. The workshop is free but donations will be accepted with 100 percent of the proceeds going to the Wounded Warrior Project

GRAND BLANC TOWNSHIP — Dan Nevins, a retired U.S. Army sergeant who lost his legs in Iraq, will be featured at a yoga workshop at Genesys Athletic Club.

The workshop, which takes place from 6:30 p.m. to 8:30 p.m. Friday, Nov. 18, is free; however, Genesys will accept donations where 100 percent of the proceeds benefit the Wounded Warrior Project.

Nevins, 43, is a yoga instructor and motivational speaker who lost both legs and suffered a traumatic brain injury after an improvised explosive device detonated under his vehicle in 2004.

The impact threw him from the vehicle and his legs were entangled in the undercarriage. His partner was instantly killed.

After two years at Walter Reed Army Medical Center in Washington, DC, and 36 surgeries to save one leg, Nevins fell into a deep depression.

He started yoga in 2014 when he took time off to recover from another surgery and struggled with post-combat stress. He reached out to a friend for help. She also happened to be a yoga instructor.

According to Nevins, as soon as he got into his first yoga pose, all of his negative thoughts stopped and he felt connected with the earth for the first time in 10 years. By doing yoga, his entire outlook on life changed, he said. He knew he was destined to teach yoga.

He became an instructor so he could connect with more people through his passion for yoga and help veterans who went through similar struggles.

Nevins said he believes that everybody has their own personal wars and wounds they can work through with the practice of yoga.

In addition to teaching the practice of yoga all over the US, he incorporates a lot of mindfulness, meditation and some motivational speaking into classes.

“Veterans often feel so isolated because we think we are damaged or different, but yoga can change that because it is all about being connected with the earth and people around you,” Nevins said.

If you are interested in attending this free workshop, please register by calling Genesys Athletic Club at 810.606.7300, or visit genesysathleticclub.com.