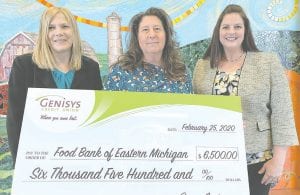 FLINT — On Feb. 25, Genisys Credit Union presented a check to the Food Bank of Eastern Michigan for $6,500 from various fundraising efforts at their Grand Blanc, Fenton, Clio, Vassar, and Marysville branches.

“We are amazed by the continued support of our members and employees to help us raise funds in order to give back to our communities,” said Jackie Buchanan, President / CEO of Genisys Credit Union. “It is through these fundraising efforts that we are truly able to ‘Make a Difference’ in the areas we serve.”

The Food Bank of Eastern Michigan was established in 1981 with a mission to decrease food insecurity in their community since then they have expanded to collect over 28 million pounds of food to serve more than 415 partner agencies throughout 22 eastern Michigan counties.

“Each year, the Food Bank of Eastern Michigan serves more than 330,000 people in 22 counties,” said Kara Ross, President and CEO of the Food Bank of Eastern Michigan. “It would be impossible for us to fulfill our mission and help families who are facing hunger without the support of committed partners like Genisys Credit Union. We are grateful for the Genisys team and their members during this year’s holiday campaign, and for the long-term partnership between Genisys and the Food Bank. The contribution this year alone will help us provide 39,000 meals to people in need.”

Food insecurity is based on a household’s inability to provide enough food for every person to live a healthy, active lifestyle. According to the 2019 Household Food Insecurity in the United States report, more than 37 million people in the United States struggle with hunger while more than 11 million children live in food insecure households. — G.G.