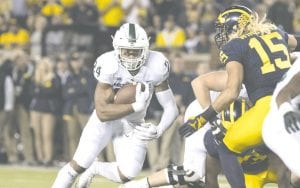 Carman-Ainsworth grad and Michigan State senior running back carries the rock against Michigan at the Big House on Oct. 7.

As always, the rivalry game was full of drama, including a downpour that soaked everyone heading into the fourth quarter. Michigan committed five turnovers, including three interceptions thrown by quarterback John O’Korn.

For his career, Holmes has racked up 1,147 yards rushing with 13 touchdowns. His average is 4.5 yards per carry. He’s also made three receptions for 38 yards and one touchdown this season.