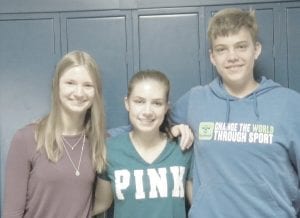 BURTON — Three German seniors at Kearsley High School are excited to step into a new school year in a land foreign to them.

Til Ruedel, 15, participates on the soccer team both in the United States and back home. He also enjoys riding his bike, watching movies and meeting friends. His favorite subject in school is math. He likes tests and quizzes. His career goal is to possibly become a teacher and he said his experience as a foreign exchange student will help him with his language for that.

“What is most different between the U.S. and Germany is when school ends here we immediately have sports activities because in Germany we have to go to private clubs and our training is at night,” he said.

“I like having pasta here,” he said. “We have pasta at home, but it tastes better here. I also find it different you have more relationship with people at church here.”

He looks forward to attending homecoming and prom, getting to know a lot of new people and learning a lot about the culture of the United States most about the upcoming school year in a country foreign to him.

Valerie Entenmann, 16, wants to be on the tennis team at Kearsley High School and plays tennis in Germany, as well. She also plays the violin and the piano. She played the violin in an orchestra in Germany and plans to play the violin at Flint Institute of Music on an orchestra. Her favorite subject in school is French because she likes France and has been there a lot. She would like to be a lawyer because she saw a lawyer on the TV show “How to Get Away with Murder” and educated herself on the job.

“The grocery stores here are huge here compared to in Germany,” she said. “In Germany, we don’t have selfpay things. In Germany, you always have to go to a person to pay for your groceries. That’s very different.”

She thinks the United States grocery stores are better.

She has been to Lake Huron since coming to the United States and swimming there has been her favorite thing about the country so far. She doesn’t swim at home.

She is also looking forward to homecoming and prom.

Emelie Schuessler is also a foreign exchange student at Kearsley High School. She was highlighted in the Burton View previously with her host family. She doesn’t play sports at home, but plays varsity volleyball at Kearsley High School and likes singing funny songs in choir. She finds having only one break and having longer classes here different.

“Here if I don’t wear a skirt to church I feel like a tourist,” she said.