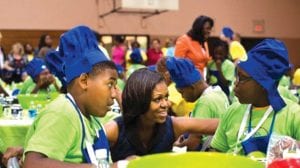 FLINT TWP. — Preventing childhood obesity is the goal of “Let’s Move Day,” a Kids Fitness Expo to be held at Dye Elementary School from 1-3 p.m., Sept. 23.

Obama launched the “Let’s Move” campaign in Feb. 2010 to address a growing problem of childhood obesity.

Nearly one in three children in America are overweight or obese, putting them at greater risk for asthma, type 2 diabetes, heart disease, high blood pressure, sleeping problems, depression and bullying, according to a Let’s Move Day press release.

Some contributing factors to these health problems include decreased exercise, large meal portion sizes, too much refined foods, not enough whole grains, fruits or vegetables and the inability for low-income families to access healthy foods.

The Seventh-day Adventist Church in North America is joining about 50 other faith and community organizations in support of the national “Let’s Move” campaign.

“The Let’s Move initiative is consistent with our church’s approach to ministering to people physically, mentally, socially and spiritually,” said Pastor Ted Wilson, president of the Seventh-day Adventist Church.

Let’s Move Day aims to heighten awareness and provide solutions about childhood obesity to families in the community. A primary mission is to engage children, their parents, schools and the community in working together to fight obesity.

Key goals of the Initiative include to increase physical activity and improving diet and nutrition choices by launching 100 summer feeding sites and starting 100 vegetable gardens or farmers’ markets in school and/or churches.

As the 2012-13 school year begins, Let’s Move! is celebrating a major accomplishment, according its website at www.letsmove.gov/

More than 4,000 schools have achieved certification in the Healthier US School Challenge, a voluntary initiative that awards schools for creating healthier school environments.

At the outset, First Lady Michelle Obama issued a challenge to certify 1,250 schools in Challenge by the end of June 2011 and then to add 1,000 schools per year for the following two years. This summer, the initiative hit the First Lady’s 2012 goal as well as the 2013 goal, a year ahead of schedule.

Let’s Move! offers various programs across the country to mobilize every sector to become involved in solving the problem of childhood obesity nationwide. More information about Let’s Move! programs and resources are provided on its web site.