GET OUT AND VOTE: Tuesday is election day 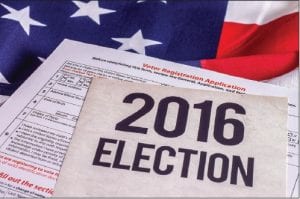 FLINT TWP. — Voters will head to the polls on Tuesday to choose the next president of the United States.

Expectations are for a showdown between Democratic nominee Hillary Clinton, who would become the first woman president and Republican nominee Donald Trump, a wellknown wealthy businessman who bills himself as a non-politician. But there will be four other presidential candidates on the ballot including Libertarian Party candidate Gary Johnson and Green Party Candidate Jill Stein.

Flint Township Clerk Kim Courts reminds voters that you still can vote a straight ticket for one party but don’t forget to turn over the ballot to vote separately for non-partisan races.

“That is one of the biggest questions I get,” Courts said about confusion over voting the back of the ballot.

The deadline has passed to register to vote in this election but registered voters can obtain an absent voter ballot if they are age 60 years old or older; unable to vote without assistance at the polls; expecting to be out of town on election day; in jail awaiting arraignment or trial; unable to attend the polls due to religious reasons or appointed to work as an election inspector in a precinct outside of the home precinct of residence.

Courts also urged patience because lines will likely be long for those who vote at their assigned precincts. Polls will be open from 7 a.m. to 8 p.m. For a list of candidates, visit: vote.michigan.gov