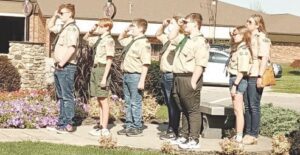 SWARTZ CREEK — They gathered to honor the fallen, to remember the sacrifices, and to share, once again, in the sense of unity that followed the horrific events of Sept. 11, 2001.

“Our world changed forever more,” said Kayanek. “Shock and heartbreak were felt throughout the country. We were all there for each other. America strong. We will never forget 9-11.”

Cramer read the roster of the 13 servicemen and servicewomen killed Aug. 13 in Kabul, and said America will never forget the bravery of the thousands who have died in operations “to fight for liberty and freedom from fear and terror” since Sept. 11. 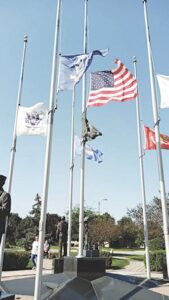 Flags at the Swartz Creek Veterans Memorial fly at half staff in honor of those who died protecting freedom.

In closing remarks, Bowman said, “Together, we endured the heartbreak of a new reality. One of the few remaining layers of innocence was abolished.”

He urged the crowd to appreciate the preciousness of life, the people who serve our communities, our families, friends and neighbors.