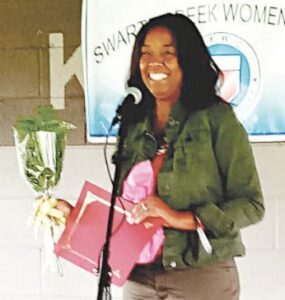 SWARTZ CREEK — The GFWC Swartz Creek Women’s Club honored four women with the Most Admired Woman awards for their achievements and contributions to the community.

Tina Kay Plumb, the driving force behind the award ceremony that was launched in 2020, was honored posthumously.

Plumb, 44, passed away Dec. 2. Her mother, Trudy Plumb, accepted the award on her behalf.

“Tina was so special,” Trudy Plumb said, adding that her daughter often said women must respect each other and not compete with each other, or “they will never accomplish what they’ve set out to do.”

“She always saw the good in people,” Parenteau said. “She always kept her word. She was unfailingly kind. And, you couldn’t know her without understanding how strong she was.” 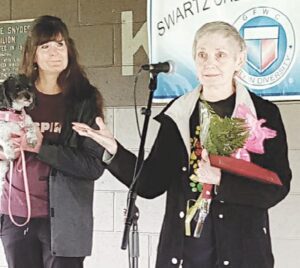 As the owner of Howe Art Studio, Howe has helped foster the rich and vibrant visual arts community in Swartz Creek. Her studio has become a haven for artists to work together in all forms to express their creativity.

In nominating Howe, Heidi Loney wrote, “She has the strength to let people be who they are because she knows who she is. When she talks to people, they know they’re being heard and respected.”

Howe accepted the award with grace and humility, and responded to Loney’s description of her saying, “It’s just the way we should be to each other.”

She added that anyone who is blessed with a special gift should share that gift with others.

In introducing Thompson, GFWC member Teresa Cannon said, “She is a dynamo of a woman.”

Thompson, founder of the community theater group Center Stage, has inspired generations of performing artists with her “determination, vision, strength, heart and drive.” 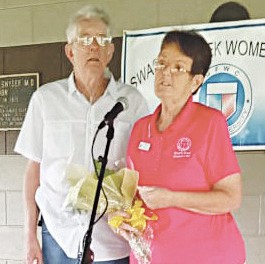 “She is the ‘center’ in Center Stage,” Cannon said. “She is fiercely protective of her family, including her stage family.”

In the 30 years since Center Stage began in the basement of a local church, Thompson has worn many hats and coordinated 90 productions.

Thompson said she was “overwhelmed” at being selected as one of the Most Admired women.

Thompson said she hopes to resume the Center Stage performances “somewhere in Genesee County” once the pandemic is over.

One of her sons, Richard Thompson, commented, “To the world, you may be one person; but to one person, you may be the world. You have been the world to so many.”

Abrams was unable to attend the awards ceremony. GFWC Michigan 2nd Vice President Rae Lynn Hicks said Abrams has assumed many leadership roles in the 64 years since she moved to Swartz Creek.

“Boots Abrams exhibits all the characteristics one automatically associates with being admired,” Hicks said. “She was the Greenleaf Drive first responder. I remember the phrase, ‘Call Boots!’ and her running out her front door to administer first aid or be the calming, take-charge person that she has always been. Just remember that when you call Boots, she still comes running.”