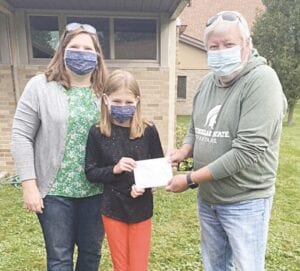 From left: Allison and Eleanor Olivo present the $106 Eleanor raised to Steve Hatfield from the Friends of the Burton Dog Park after church services last Sunday. Photo provided

BURTON — Eleanor Olivo wanted to do something to help out with the proposed Burton Dog Park, but COVID- 19 curtailed her plans to involve her Girl Scout Troop.

Eleanor didn’t let that stop her from doing something for the project, she raised $106 on her own making and selling soap and baked goods.

She presented the cash she raised to Steve Hatfield, with the Friend of the Burton Dog Park, this past Sunday during services at Our Risen Lord Lutheran Church, 4040 Lapeer Rd. The church will be the site of the dog park, which is expected to open in early October.

Eleanor’s mother, Allison Olivo, said her daughter, a 5th grader at Springview Elementary in Flushing, raised the money on her own.

“With the (coronavirus) shutdown this year, she still wanted to raise money, but on a smaller scale,” said Allison. “So, she thought about things she likes to do and settled on making soap. She adds scents and colors. We bought the soap base for her to get started.”

She said the 10-year-old also made baked good and sold them to family and friends the last two months to raise some of the money.

Allison said Eleanor loves animals and has a miniature dachshund at home which she often takes to the dog park in Flushing.