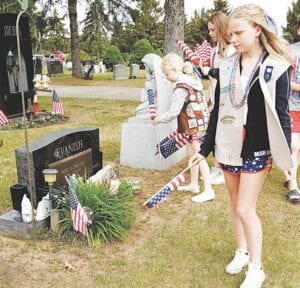 GRAND BLANC TWP. — Raeleigh Genovesi stepped carefully among the headstones, looking for the graves of military personnel. She paused to remove a faded American flag, and gently replaced it with a new one.

“This one must have been from last year,” Genovesi said of the old flag.

She was one of about 10 scouts from Troops 75722 and 13301 who gathered at Evergreen Cemetery on Memorial Day to perform an annual tradition of honoring the men and women who served in the United States armed forces.

The scouts’ tradition of placing flags on the graves of soldiers, sailors and Marines began four years ago. At that time, the troop had only 10 flags, said troop leader Raegen Genovesi.

The scouts donated $100 of the proceeds from their cookie sales toward the purchase of the flags, and Sharp Funeral Homes pitched in and donated the rest.

“It’s cool to be able to honor the men and women who have fought for us,” said scout Payton Roney. “They’ve gone through so much to fight for our freedom.”

Raeleigh Genovesi said she likes to see the reactions of the people who watch the scouts place the flags at the gravesites.

“People see us and they are smiling,” she said. “They tell us we’ve done a good job. I think it’s very important to do this, to honor the people who died for us.”

The scouts take part in the tradition out of the goodness of their hearts, not personal gain, as the task does not count toward earning a badge, Raegen Genovesi said.

Even with more than 1,000 flags, there were still some veterans’ graves at Evergreen that did not receive one. Raegen Genovesi said the troop’s goal is to be able to get enough flags to honor every veteran in the cemetery.

She said the scouts are very enthusiastic, but once they run out of flags, they’re a little sad.

“They realize how many veterans are out here, and that’s a huge visual for them,” she said.

“When they’re learning about (wars) in history class, they can relate a little better,” Raegen Genovesi said.