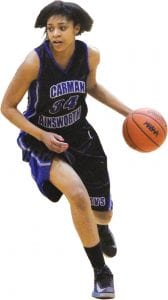 Season overview: “This team is a very special group,” said Vaughn. “I probably say that every year because every year it gets better, but these girls committed to themselves over the summer and have been playing all year round. Our girls really have shown that they understand the game. I have so many girls that are multi-dimensional players. We have girls that play two, three and even four positions. This is the sleeper team in the league. They don’t know what they’re going to get this season.” — D.N.