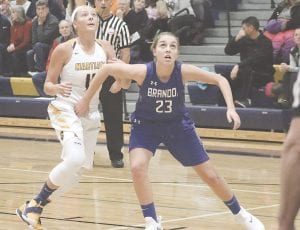 The girls’ basketball semifinals and finals will return to Michigan State’s Breslin Center in March. Photo by Kylee Richardson

EAST LANSING — Following a twoyear hiatus, the Michigan High School Athletic Association girls’ basketball semifinals and finals will return to the Breslin Center on the campus of Michigan State University on March 19-21.

Due to scheduling conflicts with Michigan State women’s basketball, the girls’ finals were unable to take place at Breslin the past two seasons. Instead, they were moved to Van Noord Arena, a 5,000-seat arena on the campus of Calvin College in Grand Rapids.

Although a perfectly-viable facility, the geographical location, with it being so far on the west side of the state, made it a highly-inconvenient destination for several teams. Breslin Center has more of a central location within the state of Michigan.

“We are thankful for the graciousness of all parties involved to allow for this opportunity to bring the Girls’ Basketball Semifinals and Finals back to the Breslin Center,” MHSAA Executive Director Mark Uyl said in a press release. “From the Breslin Center staff, to coach Suzy Merchant and the MSU women’s basketball program, to MSU law enforcement, ticketing and hospitality and then Western Michigan and Hope College and their facilities people for agreeing to reserve their arenas for us in case it’s needed – this agreement happens only because of the immense cooperation by everyone involved.”

Breslin previously hosted the semifinals and finals for the girls’ basketball tournament from 2004-06 and 2010-17. The arena was unavailable the past two seasons due to a conflict with the NCAA Div. 1 women’s basketball tournament, but that likely won’t be the case this year.

If, in this season or in future seasons, the Michigan State women’s basketball team’s tournament schedule conflicts with the MHSAA bracket, arrangements have been made. Emergency reservations have also been made with Western Michigan’s University Arena, as well as DeVos Fieldhouse of Hope College.