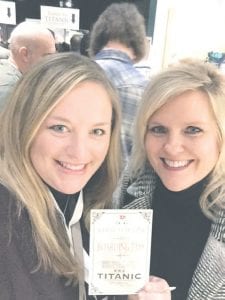 We didn’t make it. Well, at least the passengers who’s roles we assumed as we entered the Titanic – The Artifact Exhibition at Sloan Museum didn’t make it.

My friend Mary and I, not only made it, we enjoyed cocktails, a strolling dinner, an educational experience and an all-around great girls’ night out thanks to the Sloan’s Bon Voyage Party last Friday.

The VIP event, held in honor of the opening of the Titanic exhibit, featured all of the above, along with historic actors dressed in 1912 costumes greeting guests, and the chance to be one of first visitors to step foot into the exhibit open now at Sloan Museum through May 21.

Always in search of something fun to do on girls’ night, Mary and I were happy to accept the invitation.

When we arrived we were handed a drink ticket and a boarding pass. Mine belonged to Mr. Percy Andrew Bailey, 18 years old from Cornwall England. He was a second-class passenger on his way to New York City to visit his uncle before going to Akron, Ohio where he’d been hired as an apprentice butcher. Mary’s belonged to an engineer on his way to Isle Royale Michigan (what are the chances!). 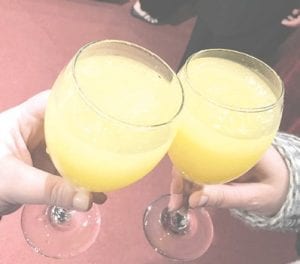 As we waited in line to board the Titanic (which was actually the line for the bar) it was fun to think about what must have been going through the minds of those waiting to board the real Titanic. Excitement, anticipation, a feeling of being part of something amazing.

Funny enough, these are the same feelings I get waiting in line at a bar. Our drink order become easy once we saw the option to partake in the Titanic’s signature cocktail, the R.M.S. Punch Romaine, a rum-spiked shaved-ice palate cleanser served to first-class passengers during the fateful last dinner aboard the Titanic on April 14th.

Recipes found online range a bit, but the version we had was delicious and included: rum, orange juice and champagne served over “an iceberg” of shaved ice. While the drink was delicious, I’m not sure it was worth the cost of a first-class ticket, which we learned at the exhibit is equivalent to an average of about $40,000 today. (I can make my own punch, thank you!) 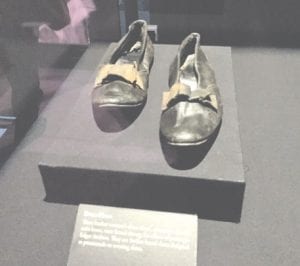 As the name of the exhibit implies, it features many artifacts recovered from the ocean floor. It’s crazy to think that while more than 1,500 of the about 2,200 passengers aboard didn’t survive (we learned many passed from hypothermia, not drowning) a set of a few dozen au gratin dishes, shoes, cold cream still in the jar and wine still in the bottle, did survive.

Speaking on hypothermia, the exhibit features an ice berg visitors can touch to get a sense of how cold the water was that fateful night. As you exit the Titanic guests can check their boarding pass against a list of passengers to see what become of him or her. The odds aren’t in your favor since only about 700 passengers survived.

The odds of having an educational experience at the Sloan Titanic exhibit, however, are greatly in your favor. Be sure to check it out while it’s above water. For more info and tickets visit www.sloanlongway.org/ titanic. 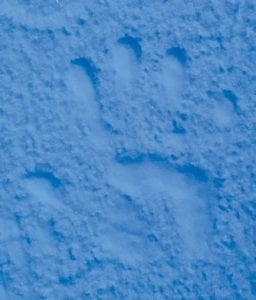