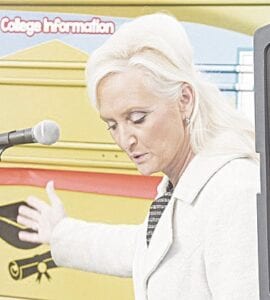 FLINT — At its regular meeting March 23, the Genesee Intermediate School District (GISD) Board of Education accepted the Notice of Retirement of Superintendent, Dr. Lisa A. Hagel, effective June 30.

Subsequently, the GISD Board of Education extended an Offer of Contract to name Dr. Steven W. Tunnicliff as the seventh Superintendent of the GISD, effective July 1. Both actions were unanimously approved by the board.

Hagel has served as the GISD Superintendent since Sept. 1, 2010. During her tenure, Hagel has led significant improvements and expansion in the programming and services provided by the GISD, including early childhood, career technical education, and early intervention services for children and families across Genesee County.

She has also provided leadership in the creation of the Michigan Statewide Education Network (MiSEN) which connects two-thirds of the schools in Michigan to one fiberoptic network, drastically reducing internet connectivity costs for schools statewide.

However, most notable is Hagel’s transformational leadership in improving the organizational culture of the GISD. Through challenging times, Hagel has infused a culture of hope and possibilities throughout the organization that has positively impacted the level of service and support provided to students, families, and our entire community.

A hallmark of this work includes the GISD Day of Giving—an annual event, now in its fourth year, that uses private donations to provide both small and significant intentional acts of kindness to people across all of Genesee County. In its first three years, the GISD’s Day of Giving has impacted over 20,000 people and the GISD looks forward to impacting thousands more again on June 4. This spirit of gratitude and compassion personifies Dr. Hagel’s contributions to Genesee County.

Hagel has received several awards, including the Justus Prentice Award for being named National ISD Superintendent of the Year in 2015. She was inducted into the Greater Flint Area Women’s Hall of Fame in 2015, was awarded the Michigan Association of School Nurses (MASN) Friend of Nursing Award in 2017 and was honored by the Sloan Museum with the Outstanding Contributions in Education award in 2019.

Members of the GISD Board of Education expressed their sincere gratitude and appreciation for the leadership Hagel has provided to Genesee County over the past 11 years as well as her tireless efforts to support children and families throughout her 35-year career in public education. Board of Education President Richard Hill praised Hagel’s leadership.

“Dr. Hagel has provided extraordinary leadership to the GISD and our entire county. Her dedication to GISD and the educators and children we serve is unmatched—she will be greatly missed.”

“We are very fortunate to have, in Dr. Tunnicliff, a leader who has been a successful local superintendent and has worked with Dr. Hagel over the last five years at the GISD. We are confident that this plan will allow for a smooth transition in leadership at GISD,” said Hill.

Tunnicliff has served as the GISD Associate Superintendent since June 2016. Prior to joining the GISD Tunnicliff served the Carman- Ainsworth Community Schools for 12 years as high school principal, assistant superintendent for curriculum and instruction, and as superintendent from 2012-2016.

Tunnicliff has served all 24 years of his educational career in Genesee County.