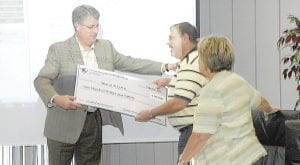 In recogniton of his service as Carman-Ainsworth board president, Superintendent Bill Haley presented a $100 check to Don Conway to support the MEN at WORK father’s group that Conway is very active in. Haley said the board figured Conway would appreciate the donation more than a plaque. Conway agreed and thanked the board for “hitting it home.” He said the check would come in handy when the group meets next week to kickstart preparations for its annual Winterfest event in December.

A nomination for this award was entered by Jennifer Kozlowski, a sister of one of Mr. Sirignano’s students. In the nomination, Kozlowski stated numerous examples of how Sirignano’s dedication, compassion and educational expertise made a difference in her sibling’s life.

Sirignano, a Goodrich High School graduate, began his GISD career in 1999 as a substitute teacher while completing his post-secondary education. He graduated from Saginaw Valley State University with a bachelor of science degree with a certificate in secondary education. He went on to earn his master’s degree in special education, with a Cognitive Impairment (CI) endorsement, from Eastern Michigan University.

Sirignano became a full-time teacher at the Marion D. Crouse Instructional Center in February 2002. He is very active with the Area XIII Special Olympics, and has accompanied students to both area and state games. Sirignano is also the varsity wrestling coach for Goodrich High School.