Gloria’s boutique draws customers from near and far 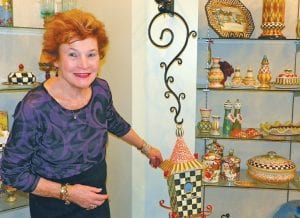 FLINT TWP. — Longtime customers of Gloria’s boutique at Genesee Valley Center could smile knowingly when a Wall Street Journal article a few months ago announced that Bergdorf Goodman luxury department store would begin selling the MacKenzie-Childs line of home goods for the first time in 15 years.

Gloria Van Duyne, store owner, also gets a pat on the back for her artistic eye and business savvy. Gloria’s has been carrying the New York-based MacKenzie-Childs line since it was launched in 1983 and still is one of only four retailers in Michigan stocking it.

“We saw it at market and bought it,” Van Duyne recalled. “Our first order was $500. We wondered coming back on the plane ‘what are we going to do with this stuff that doesn’t match.’”

That’s part of the appeal of the “beautiful and arty’’ merchandise, she said. People like to mix and match the pieces. Gloria’s has a display in the store showing how dishes can create an eclectic but interesting table setting.

Among many other wares, Gloria’s stocks a large variety of MacKenzie-Childs products ranging from furnishings to kitchen ware to garden art and more. There are plates, platters, canisters, tissue boxes, birdhouses, knobs, pet dishes, umbrellas and more in the distinctively colorful patterns that includes florals and the signature Courtly Check black and white pattern.

Van Duyne’s relationship with the company goes far enough back that she’s actually met the founders Victoria MacKenzie and Richard Childs. The company has since changed hands but has continued its handcrafted artistry which has a wide following.

“Many people collect MacKenzie-Childs,’’ Van Duyne said. But they don’t buy it just to display it on a shelf, they use it, she said of the line in which a tea kettle costs nearly $100.

“Some people buy just a few pieces and some can hardly wait until new pieces come in,” Van Duyne said.

Gloria’s, which has been in business 36 years including nearly three years at the mall location, attracts customers from near and far. One drove in from out-of-town last week to buy a canine cookie jar as a gift. He called ahead to make sure it was in stock.

MacKenzie-Childs offers many items for the pampered pooch including bedding, dishes and decorative collars.

Customers looking to buy MacKenzie-Childs Courtly Check umbrella or rain boots just introduced for spring 2012 will also find them in stock at Gloria’s.

Gloria’s also does special orders for the complete MacKenzie-Childs line.

“I can’t tell you how much people love that line,’’ said Donna Sivosky, Gloria’s store manager. “It’s been wonderful.”

Gloria’s can be reached at 810-733-7370. It has an outside entrance and is located between Macy’s department store and Barnes and Noble bookstore.