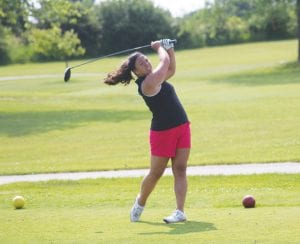 FLINT – “What a glorious day for golf,” said Bill Hense of the Flint Jr. Golf Association on Monday. “The Nicklaus Group did not tee off until 8 a.m. to let the Greens Superintendent get caught up on some much needed work.”

Hense said that 63 young men and women began play with the girls’ championship flight won by Flushing’s Kerrigan Parks with “a fine 78.” First flight honors went to Davison’s Evan VanDePutte with a 98.

The boys’ championship was won by hot-scoring Mitchell Hughes of Holly with an even par 72. Flushing’s Derek Black was the First flight winner with 75, while Parker Mitchell won the second flight with 86.

“Things are really tightening up in the race for the Brawn Cup in both the boys’ and girls’ division,” said Hense. “Mitch Hughes and Joe Montpas are separated by five points going into the last week of play. Alex Finsterwald has an outside chance of stealing the trophy from both of them. Kerrigan Parks and Brooke Thomas, both from Flushing, are only separated by 20 points. All the other girls have already been eliminated from winning.”

Next week’s play at the Captain’s Club at Woodfield is the last day of regular play. Tournament qualification for the Nicklaus Group begins on Aug. 3 at Swartz Creek, while the Palmer Group will qualify at Kearsley Lake. Both the Nicklaus and Palmer 18-hole groups will play their semi-final and final matches Aug. 4 and 5 at Swartz Creek.