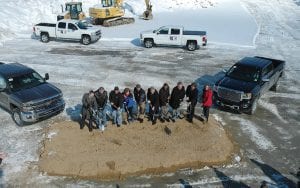 Flanked by GM-built trucks, local government and GM officials symbolically helped turn over the first shovels of dirt March 3 at the construction site of a new paint shop at Flint Assembly on Van Slyke Road. Left, a temporary tent outside of Flint Assembly on Van Slyke sheltered folks from the cold while attending the groundbreaking ceremony for GM’s $600 million paint facility scheduled to be ready for operation by fall 2016.

General Motors announced plans in mid-December 2013 to build the state-of-the art paint shop which will be the third new paint facility in North America to use an environmentally friendly wet-coat process, according to a press release.

Construction is scheduled to begin during the second quarter (April-June) with a targeted completion date in about two years and the first units scheduled to be painted in October 2016.

The 596,000 square-foot building will be located south of Flint Assembly. Construction will entail about 10,000 tons of steel to be erected by three large cranes over a seven-month period and a total concrete area of about 1.3 million square feet (20,000 cubic yards.)

Peak manpower is estimated at 280- plus people logging 270,000 hours on building construction plus 1 million hours and 550 people for process equipment installation.

Environmental benefits from the new facility will include 90 percent reduction in sludge going to landfills; 20 percent less gas and 40 percent less electricity usage; improved air management; and an Energy Star rated (contingent on meeting all requirements).

Other upgrades planned for Flint Assembly include various conservation projects to reduce the plant’s carbon footprint and an upgraded conveyor system.