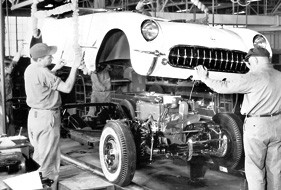 The first Corvettes came off the line in Flint 60 years ago last week.

Chevrolet last week marked its 60th anniversary of the Corvette. The first Corvette went into production in Flint on June 30, 1953.

“During the past six decades, the Corvette has been woven into the fabric of American culture, as the sports car of choice for movie stars, musicians and astronauts,” said Chris Perry, vice president, Chevrolet Marketing. “The very best Corvettes represent the state-of-the-art for their eras in terms of design, technology and performance.”

Here are some key facts highlighting 60 years of Corvette history:

• Corvette is the world’s longest-running, continuously produced passenger car. The longestrunning vehicle of any type is the Chevrolet Suburban.

• Corvette made its debut as a concept vehicle at the General Motors Autorama in New York City on Jan. 17, 1953. It was such a success that a limited run of 300 production Corvettes began on June 30 of that year.

• Corvette was produced only as a convertible for its first 10 years. The fixed-roof 1963 “split-window” Corvette Sting Ray coupe launched the second-generation Corvette.

Sales doubled and it became a yearround car for drivers in colder climates.

• No 1983 Corvettes were sold to the public. The model year was skipped in preparation for the all-new 1984 Corvette, which launched the C4 generation. Forty-four Corvette prototypes were built as 1983 models.