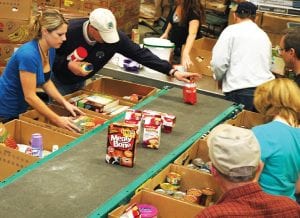 Representatives from GM’s Professional Managers Network and Women in Manufacturing groups presented a check to the Flint-based Food Bank today while GM employees sorted food that will be distributed to needy families in 22 Michigan counties.

A little more than a week ago, employees at the Flint Manufacturing Center – which includes assembly, stamping and engine operations — staged a number of fund-raisers to support the Food Bank.

The donations would not have been possible without the support for UAW members from Locals 598, 599 and 659, which represent workers in Flint Manufacturing Center, said Jaclyn Wills, a shift leader at the Flint Metal Center.

Kara Ross, vice president and director of development with the Food Bank, said her organization estimates that for every dollar donated, six meals can be provided. The Food Bank purchases food that cannot be sold, such as production overruns, label misprints and damage.

Ross said in her 15 years with the Food Bank, the organization has seen food shipments increase from six million pounds to 20 million pounds.