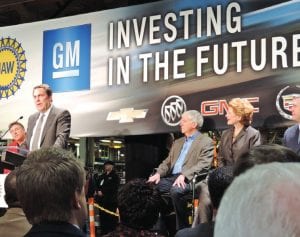 Gov. Rick Snyder and several area politicians attended a press conference where GM management announced a total investment of $1.3 billion in five manufacturing sites in Michigan, Ohio and Indiana that will create or retain about 1,000 jobs.

“You earned this,” said Mark Reuss, president of GM North America, who made the announcement, evoking cheers and an ovation from assembled plant workers.

Reuss praised the craftsmanship and hard work that truck plant workers put into producing many of GM’s top-selling, award-winning vehicles here in the birthplace of GM.

Reuss announced nearly $1.3 billion in total investments that in addition to the Flint Assembly outlay will include: 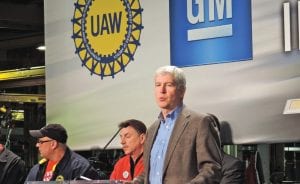 •$493.4 million in Romulus Powertrain Operations including $343.4 million for equipment to produce an allnew 10-speed automatic transmission and $150 million to increase capacity of a previously announced new V6 engine

•$121 million in Detroit-Hamtramck Assembly for a logistics optimization center

•$30.6 million in Toledo Transmission Operations for increased capacity for an existing 6-speed transmission and tooling for a new variant

“This investment signifies a commitment to the men and women of Flint Assembly and their dedication to build the best trucks on the road,” Farmer said.

Barry Campbell, UAW Local 598 Chairman, said it was great to get the news on Solidarity Monday when union members were wearing their union Tshirts.

“We have weathered every storm,’’ he said to the cheering crowd.

The new facility will use a wetcoat water-based process deemed more envivormentally friendly than the current solvent-based process. A 596,000 square-foot building will be built on land south of Flint Assembly and will require one million construction hours, according to a fact sheet provided by GM public relations.

Construction is expected to begin in January 2014 with a target completion date in 2016 and the first units scheduled to be painted in October 16.

Including this facility, GM has invested $958 million in Flint Assembly since emerging from bankruptcy in 2009.

A sea of union members wearing red “Proud to pay my dues” solidarity Tshirts cheered and gave standing ovations to almost every speaker except Gov. Snyder, whose administration turned Michigan into a Right to Work state, widely viewed as a union-busting move.

Reuss also voiced appreciation to the U.S. government for saving GM from collapse in 2009.

“One thing I will never forget is that when we needed it most, this country, America, invested in us,” he said.

He called it fitting that GM is announcing these major investments in American workers about one week after the U.S. Treasury Department sold the last of its GM shares.

The new paint facility at Flint Assembly will be the third of its kind in North America. It will retain or create about 150 new jobs. Flint Assembly, also known as the truck plant, currently has 2,950 employees working three shifts five days a week.