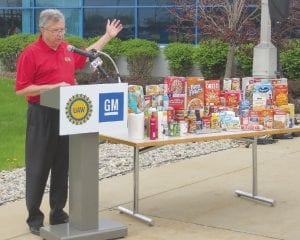 GENESEE COUNTY — Employees at General Motors’ Flint Manufacturing Operations raised more than $24,000 to support programs and services at the Food Bank of Eastern Michigan, according to a press release from Tom Wickham, communications manager.

Representatives from Flint Assembly, the Flint Metal Center and Flint Engine Operations recently presented a check for $24,290 to Food Bank officials during a ceremony at the engine plant.

The Food Bank will be able to use this donation to leverage additional funds and purchase enough food to serve more than 145,000 meals.

“The Food Bank is an important part of this community and one that our UAW-GM team holds very dearly,” said Larry Zahner, GM manufacturing manager. “The Food Bank fund-raiser was spearheaded by the GM Professional Managers Network at the three plants and supported by UAW Locals 598, 599 and 659.

GM employs about 7,500 employees at its operations in Genesee County. These employees, along with the GM Foundation and plant leadership donate about $1 million to local charities annually.

To learn more about the Food Bank of Eastern Michigan, visit its website at: www.fbem.org/