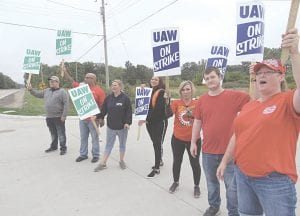 This group of GM employees was picketing Monday on the Genesee Road side of the new General Motors Distribution Center that opened just last month in Burton, on Davison Road at Genesee Road. Photo by Jalene Jameson

BURTON — About 22 pickets waved their signs and got honks of support in return from passing vehicles outside the GM Davison Road Processing Center Monday morning, during the first day of the United Auto Workers’ strike against General Motors.

Outside the Burton facility at the intersection of Davison and Genesee roads, about half of the 15 striking workers on the Davison Road side of the building came from the idled West Chester, Ohio, plant to begin work at the new facility, which opened this summer. The West Chester plant closed in May, and two months after uprooting their lives and families to come to Burton, the workers found themselves on the picket line

Steve Goertemiller, a maintenance worker, has been employed at the Burton facility since June, after transfer- ring from Ohio. He has worked for GM for 23 years.

“They transferred our work up here, so we followed our work,” he said. “We didn’t expect to be out here.”

Goertemiller said the West Chester plant he came from once employed 4,000 people in 1996 when he was hired as the result of a strike there.

“That was how I got my job,” he said. “The union wanted maintenance workers as part of their deal, so I was hired at the end of ’96. I’ve been through a plant closure, and they moved us to two warehouses. There were about 4,000 of us hired in ’96, and by the time West Chester closed, there were only about 250 left. Then about 100 of us moved up here, and we’re making new friends.”

Goertemiller said they have no idea how long the strike might last. If the strike continues for more than eight days, workers will receive $250 a week in strike pay. He said the union also is setting up COBRA healthcare and other benefits so the workers can keep their benefits package.

This is the first experience many of the workers have had being on strike. The UAW has not struck GM since 2007. Gary Hill, another transferee from the West Chester plant, has worked for GM for eight years, and this is his first strike. He works as a packer at the Burton facility and said the strike is not the first surprise workers have had since coming from Ohio.

Hill said the supervisors are mostly local people who were moved over from the DR-1 facility in Burton when it closed.

On the Genesee Road side of the 1.1 million-square-foot building, a group of about seven workers were on the picket line Monday morning.

Jenny Evans started working for GM at Delphi and eventually moved to the Burton facility. She said she knew the union would call for a strike, but she wasn’t sure whether their local would be a part of it. She said because Michigan is a right-to-work state, employees don’t have to join the union.

“For the most part, you get enrolled as soon as you start your job,” she said. “You can be a temporary worker and still be a union member.”

Evans said the only people continuing to work are sanitation workers who have a different contract, but no one else has attempted to cross the picket line.

Evans had one last thing to say to GM.

“Leave our healthcare alone, and hire the temporary workers,” she said.

After negotiations broke down on Sunday, the union voted to go on strike at midnight. The UAW wants healthcare benefits to stay at their current level, a definite path for temporary workers to become permanent and closing the wage gap for workers hired after 2007. The union represents about 46,000 workers at 55 facilities.