GMC SALES CLIMB AS BUYERS TAKE SIERRAS ‘OFF THE TRUCK’ 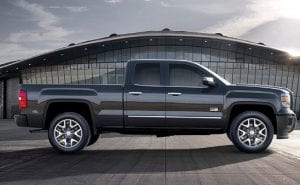 GMC retail sales were up 23 percent year over year in July, closing at the highest sales volume since 2006. Total sales, up 14 percent, were the best since 2007.

The new 2014 Sierra full-size pickups are leaving dealer lots almost as soon as they arrive, Goebel said. The average “days to turn” is 14 days, compared with the segment’s 76-day average. Combined with 2013 models, the new Sierra helped drive the pickup’s best July sales since 2007. Year-overyear Sierra retail sales were up 53 percent while total sales were up 49 percent, Goebel said.

“The all-new 2014 Sierras are selling as soon as they come off the transporters, especially those with the SLT trim package,” said one local dealer.