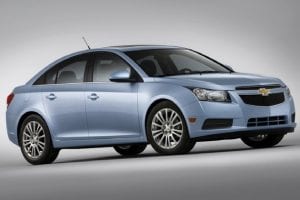 Chevrolet’s small and compact car sales are up 229 percent year over year from the second quarter of 2010 to the same quarter this year.

The jump is evidence of the brand’s continuing success in attracting buyers of all ages, including millennials, whose purchase priorities include advanced technology, fuel economy, functionality and affordability.

Chevrolet’s share of buyers under 35 continues to increase year over year, led by vehicles such as the Cruze, Sonic, and, most recently, the Spark mini car, said Annalisa Bluhm – Spark, Sonic and Cruze spokesperson for Chevrolet.

Leading the segment is the Cruze, which is among the top-selling Chevrolet vehicles to those under 25. One in four Sonic and Spark buyers are also under 25, while almost six in 10 buyers of those cars are new to Chevrolet.

Both the Spark and Sonic feature Chevrolet MyLink infotainment systems powered by smart-phones, including apps such as BringGo Navigation, Pandora, Tune in and Siri in Eyes Free Mode, which helps them stay safely connected at a fraction of the price of in-dash navigation.