Go-Kart racing is in her blood 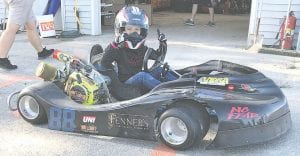 Alissa Wilson gets ready to race at Owosso Motorsports Park in her custom-fabricated go-kart. Alissa, who turns 10 on Friday, has been racing all summer. Photos provided by Richard Wilson

BURTON — Move over, Danica Patrick. This girl is coming up right behind you.

Alissa Wilson of Burton wants to race in the tracks of female drivers like her hero, Patrick, and is getting an early start by racing her custom-fabricated go-kart at Owosso Motorsports Park.

Alissa, who turns 10 on Friday and starts fifth grade at West Bendle Elementary School on Sept. 3, has go-karts and racing in her blood. Her proud dad, Richard Wilson, took her to Extreme Indoor Kart Racing in Clio last year to race go-karts.

“She wanted to do it. She’s got a gas-powered four-wheeler, and I showed her a thing on YouTube about extreme indoor kart racing,” he said. “The third time I took her there, she hit the wall straight on. Her helmet flew off, and she flew out of the kart. She started crying because she thought she was in trouble, and I said, ‘No more racing.’ She said, ‘No, I want to race.’”

Alissa told her dad she wanted a go-kart for Christmas, but he told her that wasn’t going to happen. When Christmas morning came, Alissa headed for the tree. 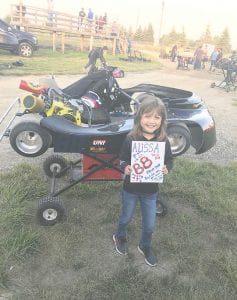 Alissa Wilson shows off her custom fabricated go-kart and the sign her friend made for her at Owosso Motorsports Park. Alissa, who turns 10 on Friday, has been racing all summer.

“I could feel part of the frame, but I thought, ‘I’m scared. I don’t want to open it,’” she said. “Then I opened it, and I was so surprised. My dad promised me I was not going to get a go-kart.”

Richard said he has loved go-karts since he was a child and still has a newspaper clipping about his father, uncles and friends racing go-karts. He said his older brothers played hockey, and any extra family dollars went to their travel and equipment, so there was no money left for him to race go-karts competitively.

“It’s been in my blood since I was born,” Richard said. “We had three karts, and we’d make it a social occasion with my dad, uncles and their friends. Now she’s my little hot rod.”

Richard and Alissa took her new kart to A.J. Thompson who owns No Limit Karts & Parts in Clio to have a custom fabricated body made.

“There were a bunch of people ahead of us, and it took two or three months to fabricate,” Alissa said. “I have a red, white and blue helmet, so he made it match. I had to go and get fitted for it so I could reach the pedals and the steering wheel. A.J. told us where to race at, and we just went there.”

The first time Alissa raced her kart was also the first time she sat in the finished product. Since then, she’s raced 15 times, and Richard said she’s gets better and better every time. Alissa said her kart goes 30 to 4 miles per hour. When she drives, she has to wear a neck brace, helmet and gloves. She said it’s optional if drivers want to wear a body suit. For her first race, she wore a fire-proof jacket and a chest protector.

Not only is there a lot of safety gear to wear when she races, there are lots of things to remember.

Richard said Alissa’s mom, Jackie, gets a little nervous when her daughter races.

“She doesn’t like to watch, but she still wants her to win,” Richard said. “She’ll start yelling, Go faster! Go faster!’”

Richard said there are usually two to five kids racing. Alissa is in the rookie class, which means Thompson fitted her kart with a plate on the carburetor that restricts gas and air flow so it won’t go faster than 40 miles per hour. Next year, she will probably move into the rookie novice class, which has a different plate that will allow her to go a little faster. Thompson, who is one of Alissa’s sponsors, also has access to the sports park track and lets Alissa use it for practice.

“He just likes to see the kids having a good time and make sure they’re safe,” Richard said of Thompson. “He’s great for doing what he does. He probably spends his own hard-earned money for the kids. If you need a part and you don’t have a lot of money, he’s there for you. He’s a very awesome guy.”

Alissa has become a bit of a local celebrity with her hot rod go-kart. She recently had her kart on display during Back to the Bricks in front of Fenner’s Flowers in Burton, another one of her sponsors, and is well-known in her neighborhood.

“One of my friends next door loves it,” Alissa said. “I ride it down the street, and they watch me. They can’t ride in it because it’s only fitted for me. My friend made a sign that says, ‘Alissa No. 88.’ It’s red, white and blue. It says, ‘You go, girl. Move over, boys, and let this girl show you how to race.’ She told my dad’s friend she wants to race.”

The racing season is winding down in September. The next time Alissa and her fellow go-kart racers will be on the track at Owosso Motorsports Park is Sept. 7. Practice starts at 6:30 p.m., and races are at 8 p.m. Richard said there is plenty of room on the go-kart for more sponsors, and anyone interested in sponsoring Alissa can contact him at (810) 287- 4041.