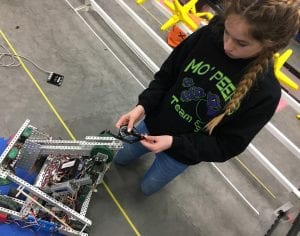 Lydia Minzey, 12, uses a protractor to measure how far the robot has turned, during an Open House last weekend, showcasing the robotics teams’ preparation for the World competition in mid- April.

FLINT TWP. — MO’ Peeps and Even MO’ Peeps robotics teams, based at Carman-Ainsworth Middle School, have set up a GoFundMe drive to raise money to help them prepare for the VEX Worlds 2017 robotics competition in Louisville, Ky., April 19-25, according to a press release. Donations are being accepted through April 7 at: www.gofundme.com/3g758f4

The two Carman-Ainsworth Middle School robotics teams hope to cap a successful first season with a world championship win at the VEX Worlds competition, that will feature approximately 160 teams from the United States, Canada, Mexico, Colombia, China, Singapore, Russia and several other countries.

The teams collected a total of 17 awards, including nine tournament championships. In VEX Robotics, the top eight teams, after qualifying rounds in a tournament, select alliance partners. The Peeps were strategic in each tournament to ensure both teams paired up in the elimination rounds.

“Our philosophy is that we win together,” said coach Leanne Welch, a third-grade teacher at Rankin Elementary School and a veteran robotics coach. “There is healthy competition among the team members but, at the end of the day, the students want to help each other succeed.”

That attitude has helped the Peeps throughout the season, with the students sharing ideas and strategies related to designing, building and programming the robots. VEX Robotics exposes children to STEM-related activities, something that is not lost on the team members.

“I started the season using simple drag-and-drop programming on the computer but quickly learned how to write lines of code to create more complex commands for the robot,” said Alex Wickham, a seventh-grade student at Carman-Ainsworth Middle School.

Added Lydia Minzey, another CAMS seventh-grade student: “We’re learning how to work together, solve problems and set and achieve goals. These will help us in our future jobs.”

This afterschool program offers young students an opportunity to explore technology in a fun, positive, and safe environment. Every year features a different type of “game.”

The teams hope to raise $6,000 GoFundMe donations toward competition expenses. Starting from scratch, they have built and rebuilt two robots that kept them in the winner’s circle. They have competed against both high school and middle school teams

“We are very excited to be going to Worlds,” they stated in their GoFundMe appeal. “It’s a once in a lifetime chance and we want to make the most of it and hopefully come out on top, or at least just have a really good time trying. This is something that we worked very hard to accomplish.”

Donations will be mostly used for materials for the robots but also to offset the cost of travel, boarding, food, and maybe a little fun if time allows, during the five-day event. To give an example of expenses, the team needs 40 robot motors that each cost $15 – a total of $600. The robots’ cortex (computer) cost $250 each and four are needed – a total of $1,000. Other “nuts and bolts” materials are needed to enable the team to address unforeseen problems that may go wrong during the competition.