Four vacant lots to be auctioned off 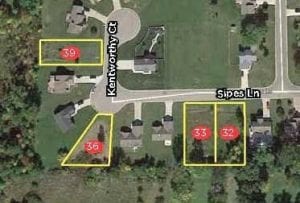 Four vacant residential lots in the Bethel Woods Park Development off West Court Street will be auctioned off next week.

FLINT TWP. — Four vacant residential lots in the township are among bank-owned properties being auctioned off next week.

Oxford Bank of Lapeer has authorized the sale of 22 properties including ten in Genesee County, five in Lapeer County, three in Oakland County, three in Tuscola County and one in Macomb County. All will be offered at the auction at 7 p.m. on Thursday, April 28 at the American Legion Post 1, 1701 W. Genesee Street in Lapeer.

The Flint Township properties are vacant lots zoned residential on Sipes Lane in the Bethel Woods Park subdivision, off West Court Street. It is an area of newer homes developed in the late 1990s. It is in the Carman- Ainsworth school district.

Another nearby residential property also on the auction block is at 7203 Saratoga Drive, also a newer subdivision of homes located off Elms Road, just north of Corunna Road. The half-acre site also is vacant. It is in the Swartz Creek school district.

The auction is being conducted by Hudson & Marshall. Photos and more details about auction terms and fees can be found on their website at www.HudsonMarshall.com or on the bank’s website at www.oxfordbank.com/assets/files/t9rdEBzk/ 2016/04/13/Oxford%20Bank%20 Auction%20Listings.PDF