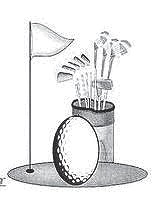 FLINT TWP. – Men and women golfers are sought to sign up for the Barry Saunders Invitational Golf Scramble, on Sunday, September 25 at Fenton Farms Golf Course, 12312 Torrey Road in Fenton.

Sponsored by Men at Work, the golf outing is a fundraiser for the annual Winterfest holiday party held at Carman-Ainsworth Middle School. This will be the 9th year for the popular pre-Christmas party that aims to help children and their families during the holidays. The event includes free giveaways, food and entertainment by local musical groups including C-A students.

Men at Work is a parents group started in September 2000 by a group of fathers who wanted to be more actively involved in their children’s education.

The event is named in honor of Barry Saunders, a former C-A board president and member who died in 2008. He is remembered for his 22 years of service to the school district as an advocate for children and senior citizens, including with parent/teacher groups, athletic boosters and the Carman-Ainsworth Senior Center.

Prize sponsors and community donors also are being sought to support the golf outing.

Prizes will include to top finishing teams, for longest drive, closest to the pin, straightest drive and holesin one. There also will be a 50/50 raffle.

All proceeds will benefit local charities. As part of each Winterfest event, each guest is asked to bring a donation of a non-perishable food item, a new/gently used coat or unwrapped toy to be donated to the Salvation Army, Eastern Michigan Food Bank and Toys for Tots.

Winterfest is usually held in late November or early December.