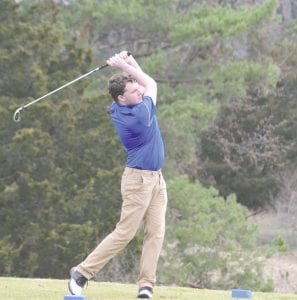 DAVISON – After a shortened season due to the weather, the Carman- Ainsworth boys’ golf team now has its sights set on its Div. 1 regional, held next Friday, May 31, at Davison Country Club. Though the Cavs will not be able to post a team score because they don’t have a full team, the three remaining golfers on the squad will be vying for one of the topthree individual spots in the region to qualify for the state finals. The top-three teams in each region and the top-three individuals not on a qualifying team will advance to the state meet, held June 7-8 at The Fortress in Frankenmuth for Div. 1.

The Cavs will have three golfers, John Karbowski, Nathan Ratynski and Aaron Carter compete in next week’s regional. Karbowski has been putting up the team’s lowest scores for the season, while Ratynski and Carter have shown steady improvement as the season progresses. Each golfer will be looking for one of the top-three individual spots in order to advance to the June 7-8 finals.

The Cavs competed in the Bay City John Glenn Invitational at Bay Valley Golf Course on Monday. Saginaw Heritage won the event with a 350, Saginaw Nouvel Catholic Central was second with a 360 and Swan Valley was third with a 367. Carman-Ainsworth did not have enough golfers to post a team score.

John Karbowski led the team with a 99 on the day, while Nathan Ratynski carded a 109 and Aaron Carter a 125.

Last Thursday, Carman-Ainsworth competed in the third Saginaw Valley League jamboree of the season at Flushing Valley. Lapeer won with a 319, while Flint Powers was second with a 321 and Grand Blanc third with a 324.

Karbowski finished the day with a 103 to lead Carman-Ainsworth. Ratynski carded a 110 and Carter chipped in with a 127.