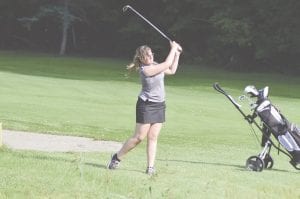 Carman-Ainsworth’s Jamie Arnold chips onto the green during a meet at Davison Country Club on August 28. Photo by Austin VanDaele

FLINT TWP. – The Carman-Ainsworth girls’ golf team saw its season come to a close after last week’s Saginaw Valley League championship. The team has chosen to opt out of its regional for the second-consecutive season, deciding instead to focus on rebuilding and preparing for the coming season.

Had the Lady Cavs competed, they would have traveled to Hartland Glen Golf Club on Wednesday. Other teams in the regional include Brighton, Davison, Grand Blanc, Grand Ledge, Hartland, Holt, Howell, Lapeer, Milford, Saginaw Heritage and White Lake Lakeland.

Both Brighton and Hartland enter the regional as state-ranked teams, with Brighton at No. 4 in Div. 1 and Hartland No. 9. Other teams including Davison and Grand Blanc have also had strong seasons and will be in the mix for a top placement throughout the day.

The top-three teams and top-three individuals not on a qualifying team will earn a spot in the Div. 1 state finals, held at Bedford Valley in Battle Creek on October 19 and 20.