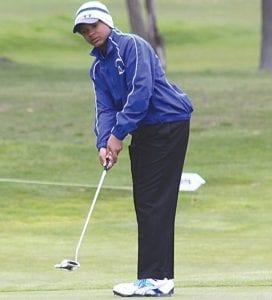 Haywood Petty leads the Cavs with an average in the low 50s.

BAY CITY — Carman-Ainsworth likely will get nothing but experience out of the Div. 1 golf district it will play in next week. But, that’s just fine with coach Bob Blaylock and the Cavaliers.

The Cavs will mix it up with some of the best teams on this side of the state in the 12-team tournament May 31 at Bay County Golf Club. The field also includes sixth-ranked Traverse City West.

Carman-Ainsworth is just looking to gain some seasoning for a roster long on underclassmen and short on confidence. The Cavs have taken their lumps this spring and finished 10th in the Saginaw Valley League tournament last week.

“The hardest thing has been keeping them from getting discouraged,” said Blaylock. “I keep telling them they’re the best five golfers in the school.”

Sophomore Haywood Petty leads the team with a nine-hole scoring average in the low 50s. The rest of the Cavs — Kyle Fluker, Alex Frank, Brad Woolard and Garrett Wilson — are all in the mid-60s. But, all have made great strides, Blaylock noted.

“Their ball-striking has improved dramatically since the beginning of the year,” he said. “They just need to learn how to manage the course.”

The top six teams and the top six individuals not on those teams will advance to the regional June 6 at Boulder Pointe in Oxford. From there, the top three teams and top three individuals move on to the state finals June 14-15 at Forest Akers West on the campus of Michigan State University.