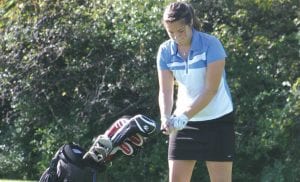 Meghan Borgerding led the Lady Cavs in last year’s Lapeer Tuneup with a 94.

Nineteen teams, including Carman- Ainsworth and two-time defending champion Utica, are entered in the tournament, which is the first competition of the season for most schools. Golf teams have been practicing only since Aug. 8, and the first competition was not allowed by the Michigan High School Athletic Association until yesterday.

For that reason, it’s tough to predict the contenders for the Tuneup title.

“That’s always hard to tell, because you don’t know who they lost last year,” said Mike Ogg, coach of tournament host Lapeer West. “Last year, we had nine teams that played in the state finals. That’s a good field.”

Another good field is expected, including West, which has won four straight regional championships and finished fifth in last year’s Tuneup. All of the other Metro League teams except Linden also are entered, including Lapeer East and top contender Fenton. The Metro sent five teams to the state finals last year.

Meghan Borgerding led Carman- Ainsworth last year with a 94 in the Tuneup.

Because it’s the first competition of the season for most schools, Ogg has relaxed some of the rules for the Tuneup.

“We’ve made it a little easier than we will in regular matches,” he said. “We don’t play ‘out of bounds,’ we play everything like a lateral hazard so kids don’t have to go back to the tee and hit. Coaches appreciate it. It’s their first match after practicing a few days, and most teams have some new kids. That way they’re not discouraged in their first match.”