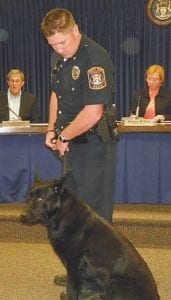 Gunner was asked to assist with a suspicious package and was instrumental in recovering a suitcase containing $75,000 relating to a drug deal, Sippert said. Later that day, the dog helped locate 86 pounds of marijuana that came in a different shipment.

Gunner goes out when a canine is requested by the Flint Area Narcotics Group (FANG), Sippert said.

“He is maturing in his job and doing a fantastic job,’’ he said.

No further details are available.

Gunner joined the police force in June under the care of handler Officer Neal Donovan, after graduating from a six-week training program at the Oakland Police Academy.

He is the fourth dog to serve the police department in drugs and tracking work since it started the canine program in 1999.