Liquidation under way at local stores 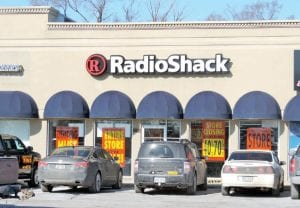 A liquidation sale is underway at the Radio Shack store on Miller Road — one of six in Genesee County being closed under a companywide restructuring process. The store at Genesee Valley Center mall closed about two weeks ago.

FLINT TWP. — Store closing signs are posted in display windows of the Radio Shack store at 3306 Miller Road in the Yorkshire Plaza but the store located at Genesee Valley Center mall already is closed with signs posted directing shoppers to the Miller Road location.

The long-time electronics chain is restructuring after filing on February 5 for relief under Chapter 11 of the United States Bankruptcy Code.

Its restructuring plan is to transfer some stores to new ownership and liquidate remaining company-owned assets, according to a notice posted on the company website.

The Miller Road store is among six in Genesee County, approximately 56 Michigan and 1,784 company owned stores in the United States on a list of stores to be closed. Stores in Clio, Fenton, Flint, Grand Blanc and Davison are also on the closure list.

The Genesee Valley store was not on the closing list but mall officials said it was vacated about two weeks.

Radio Shack officials declined to disclose how many employees are affected locally and referred media inquiries to information posted on its restructuring website.

“We intend to transition a portion of our stores to new ownership and begin a sale process for other company owned assets,” according to the published statement. “Our domestic and international franchise stores are independently owned and are not part of our restructuring. We expect to continue to maintain day-to-day operations at our open stores and on our website at RadioShack.com, throughout the sale process.”

Radio Shack currently has about 4,000 company owned stores in the United States. It has secured an asset purchase agreement with General Wireless Inc., an affiliate of Standard General, to acquire 1,500 to 2,400 stores.

General Wireless has an agreement with Sprint to establish a new “store within a store” retail concept in up to 1,750 of the acquired stores.

Closing stores are now selling off remaining inventory. Closures are targeted in three phases over the next two months.

The Flint Northwest store on Clio Road was among 162 slated to be closed by February 17.

Many of the 636 stores closing in phase three are in the Detroit area including one on Baldwin Road in Auburn Hills.