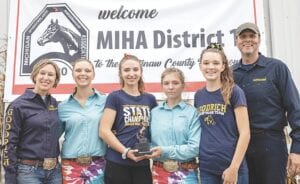 GOODRICH — The 2018 & 2019 MIHA Division B State Champion Goodrich High School Equestrian team kicked off the 2020 Season by competing at the MIHA Districts on Sept. 26-27 at the Saginaw County Fair Grounds.

Goodrich accumulated 441 points to clinch the District 11, Division C Championship over second place team Pinckney who came it at 169 points.

The Goodrich team is led by Seniors Aubrey Stockwell and McKenzie Melosh, Junior Cate DeSota and Sophomore Bella Kirby. Goodrich and Pinckney will move on to compete at the MIHA Regional Championships on Oct. 3-4 at Fowlerville Family Fairgrounds. There will be a total of eight teams competing in Division C with the top two teams advancing to the MIHA State Championships.

Goodrich will be vying for a seventh straight trip to the State Finals and a chance to defend their two consecutive State Championship titles.