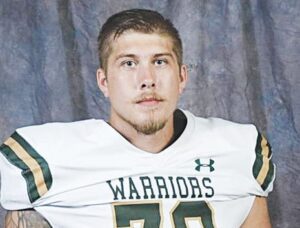 Mitchell, a fifth-year redshirt senior at Wayne State, was given captaincy honors along with graduate students Jake AmRhein, Jalen Lewis and Lane Potter, redshirt senior Brandon Tuck-Hayden and redshirt junior Julius Wilkerson. Mitchell, AmRhein, Lewis, Mitchell, Potter and Wilkerson were slated to be captains for the team in 2020 before the season was canceled due to COVID-19.

Since transferring to Wayne State in 2018, Mitchell has been a stalwart on the Warriors’ offensive line as a tackle. Wayne State plays in the Great Lakes Intercollegiate Athletic Conference (GLIAC) at the NCAA’s Division 2 level.

Mitchell, who graduated from Goodrich in 2016, was a three-year varsity letterwinner for the Martians football team and primarily played tight end and defensive end for coach Tom Alward. Mitchell hauled in 19 receptions for 272 yards and three touchdowns in the Martians’ 2015 season and received Associated Press and Detroit News Division 3-4 Honorable Mention All-State recognition.

Mitchell also played basketball and baseball for the Martians. He was voted First Team All-State by the Michigan High School Baseball Coaches Association after recording a school-record 58 RBIs in 2016 along with 14 doubles and seven home runs. He also holds the school record for career doubles with 36 and finished with 112 career RBIs.

Mitchell started his college football career at Davenport University in 2016 and played in 11 games for the Panthers in 2017. He then transferred to Wayne State in the summer of 2018 and redshirted due to GLIAC transfer rules.

In 2019, Mitchell played all 11 games at left tackle in his first full season with Wayne State, earning All-GLIAC First Team honors and helping the Warriors rank second in the GLIAC in rushing yards per game and fewest in sacks allowed per game. He was also named to the GLIAC All-Academic Excellence Team.